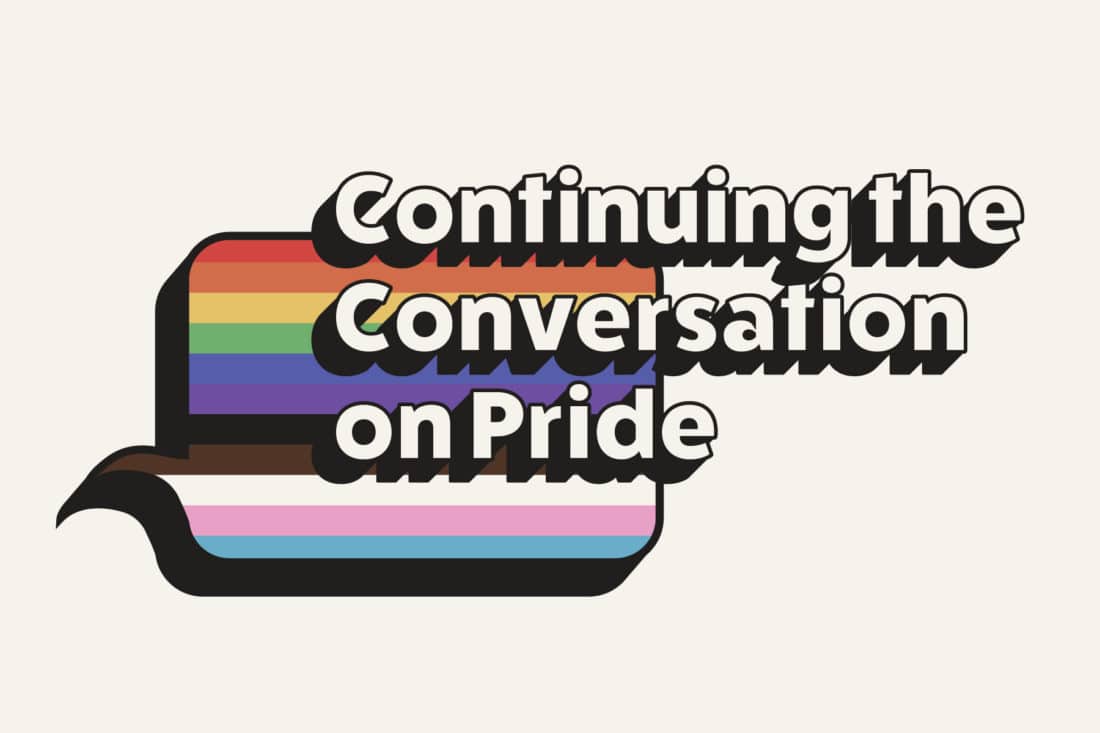 Continuing the Conversation on Pride

While we take time during Pride Month to celebrate the LGBTQ+ community, we should be celebrating and having conversations throughout the year. Given the current political climate and the volatility of LGBTQ+ rights in America, it’s more important than ever to continue this conversation.

In June, we hosted an internal Pride Round Table discussion, which garnered a lot of great conversation and takeaways on how to support the LGBTQ+ community throughout the year. Beginning with a brief overview of the history of Pride Month, our panel, featuring Media Cause employees and a few guests, shared their experiences and thoughts on advocacy and allyship as members of the LGBTQ+ community.

As the conversation coincided with the overturning of Roe v. Wade, this discussion was not only extremely poignant but an emotional conversation. Our panelists touched on the notion that, with the recent court ruling, cases pertaining to the rights of the LGBTQ+ community—Romer v. Evans in 1996, Lawrence v. Texas in 2003, and Obergefell v. Hodges in 2015, among others—may be the next to be overturned, leaving many in the community fearful, outraged, and ready to take action.

Kjerstin Laine, Senior Fundraising Strategist at Media Cause, kicked off the panel with a background on the history of Pride and an educational session to review key terms that allies should be aware of. Here are a few of the takeaways:

Traditional gender roles primarily stem from early colonizers’ Puritanical beliefs. Sexuality and gender identity are actually a spectrum rather than dichotomous. How people identify is deeply personal and can fall across the spectrum— and can change and evolve. As our understanding of this broad spectrum of sexuality and gender continues to grow, so does our desire to include all identities in the community—which is why the acronym that represents the community continues to evolve. Coined by Kimberlé Crenshaw, an academic lawyer, the term “intersectionality” was initially used to describe the unique experience of Black women in the civil rights movement. Intersectionality acknowledges the unique experiences of people based on their different identities within historically marginalized communities and how those identities intersect in the face of discrimination. Because the LGBTQ+ community holds a wide variety of identities, intersectionality has become an essential factor in describing and understanding the layered discrimination and oppression the community faces.

A lot of LGBTQ+ civil rights cases are based on the right to privacy—that was defined in Roe v. Wade. Obergefell v. Hodges is the Supreme Court case that made marriage equality the rule of the land—we do put an asterisk on that because disabled people still do not have marriage equality. Many of them can’t get married due to losing their benefits, and there are LGBTQ+ disabled individuals who are compounded by all of these attacks on their humanity and their right to live. There’s no understating the fact that Roe v. Wade today is not just about people with uteruses and the right to abortion. It could upend all of these major, landmark civil rights milestones for the LGBTQ+ community and for everyone.

“A big part of advocacy is sticking with it…being an ally, not just in a visible way. I think, particularly, a lot of organizations get really excited around Pride Month and put up flags and do events, and that’s great. It’s not a bad thing,” said JP Posnak. “But, meanwhile, oftentimes, there are these policies and practices that, even if well-meaning, end up impacting queer people or queer people of color in a negative way…the shirts are awesome, but making sure you’re doing the work in a more meaningful way is important, too.”

“Getting out of our own spaces, even within the community,” is a great way to practice allyship, said Brad Blake. “Getting out of our comfort zones, spending time learning from and listening to people and their experiences, and asking what you can do to help,” are great ways to get involved.

“…Put your vote where your mouth is. I have a lot of people close to me in my life, who said, ‘I’m fine with people being gay. I support you, I love you. I think it’s great that you’re married to a woman. But, I’m fiscally conservative, so I’m probably not going to vote for the person that’s going to protect your rights.’ Going to Pride with queer people isn’t enough,” said Janine Guarino. “…You need to be voting, locally and nationally, for people that will make sure our marriages are legal and make sure we have dignity and rights that everyone deserves.”

“Oftentimes, it’s so easy to give support to the largest organization or the one that has the most notoriety in the LGBTQ+ community, but there are a plethora of local, city, and state-wide organizations that are doing a lot of the groundwork, that, oftentimes, the larger, national umbrella organizations get credit for. But people who are at your city council meetings or your municipal or county meetings or are lobbying in the halls of state government are really pushing for change on a meaningful level as well and deserve support in terms of money, in terms of amplifying the work that they’re doing,” said Derrick Clifton. “So, be on the lookout for those types of organizations, and spend the time, wherever you are locally, to see what other nonprofits or community-based organizations are out there fighting the good fight.”

“The States Project does a really good job of working within those local governments,  having giving circles, and focusing on making change as local as we can and trickle up versus focusing just on some of the bigger elections,” said Nate Pressler. “So making sure you can stay involved and engaged in your local politics [is important]. And even, too, being a cis-gendered, white gay man, is understanding my privilege. And being able to not take the mic but, rather, be able to lift up different voices…and be an ally within our own community.”

As mentioned by our panel, with the overturning of Roe v. Wade, the milestone markers of the progress our nation has experienced are under attack. There is an urgent need to take action and continue the conversation about protecting LGBTQ+ individuals and their rights. Grassroots efforts, advocacy, and creating safe spaces, in addition to those mentioned above, are all tools we can use to positively impact our local communities each day as we fight for equality.

More about our guest panelists

Derrick Clifton is a freelance writer on identity, culture, and social issues. They’ve written for NBC News, VICE, Out, Them, Mic, Windy City Times, Chicago Reader, and more. Clifton’s work has won awards from the National Association of Black Journalists, NLGJA – The Association of LGBTQ Journalists, and the Chicago Headline Club (SPJ).

JP Posnak is a mental health clinician who currently works as a couples therapist for Northampton Center for Couples Therapy. JP is also a Senior Consultant for And Still We Rise, an organization that seeks to decolonize mental health care, promote culturally affirming practices, and create healing spaces for all. JP identifies as trans/non-binary and specializes in clinical work with LGBTQ+ youth and adults. JP is passionate about advocating for trans-inclusive practices in the workplace.